We were talking to a NetApp Customer the other day about upgrade options for his NetApp Storage Infrastructure. He 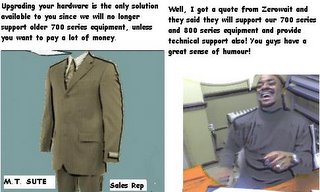 told us that his NetApp representative had told them that the only option they had for service and support was to upgrade their systems as NetApp was no longer going to support their NetApp F720, F740 & F760 Hardware. He was non plussed as the hardware has worked unfailingly for years. He had heard about Zerowait from some of his friends in the business and called us. We processed his request for a quote for a ZPA policy for service and support and sent it off with a few references.

Later in the day he called us back and told us that he was forwarding our quote to his purchasing department because he was impressed with the comments he heard from the references we sent. He also told us that our other customers had told him about some of the other things we do, and he was interested in some of our NetApp engineering & NetApp migration services also.