NetApp sells used parts!
NetApp needs to recycle defective parts, many of which can be repaired, as quickly as possible. Product lifecycles in the high-tech world are notoriously short. A single circuit board might u 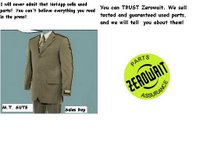 ndergo 20 revisions over seven years, notes Fabiaschi. Yet customers are receiving brand new boards only between 20 and 30 percent of the time. The trick is to maximize the use of a given part before it reaches its inevitable moment of obsolescence.

The other day a large company’s engineer called us up for a quote on some NetApp cards, we quoted him and then he wrote us back that he was concerned about the cards being used. I can understand his concern, especially since NetApp charges new prices for cards that are more often used then new according to the article above.

Zerowait sells used NetApp parts, we test them and guarantee them. And Zerowait will save you a bunch of money !