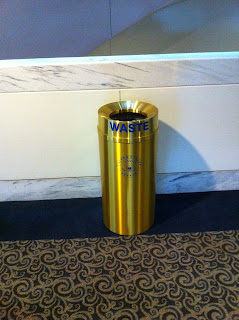 I visited Garth Spencer from Senator Carper’s staff Monday in the Hart Senate Building, and while there had the opportunity to photograph this very small “Senate Waste Receptacle”. I found it rather ironic that I was there to speak about the huge amount of waste the government incurs each year by allowing government IT groups to specify “OEM only” or “New only” for IT purchase and support contracts. Over the last 10 years Zerowait has built an international business by offering exceptional deals on off-lease NetApp systems with transferable software licenses and top notch NetApp support. Along the way we’ve sold and maintained systems for various government and military agencies, saving them hundreds of thousands of dollars, which is a very small percentage of the Federal Government’s IT support expenditures. For the last decade the majority of our hardware, service,  and support business has been with commercial customers, but perhaps the time has come for  Federal Government  departments to tighten their belt also?

During our discussion we discussed the multiple ways that Delaware’s Senator Carper and the Senate IT Committee could  easily reduce Federal  IT costs, without effecting reliability.  Sequestration offers the government the chance to reset many of the wasteful spending habits it has fallen into. By  taking full advantage of the commercial IT marketplace for service and support alternatives  the Department of Defense and other Federal  departments could affordably maintain and grow their  IT assets even as spending was reduced.

Allowing competition for hardware support for all Federal IT equipment is an easy place to start saving money. The Federal Government could easily stretch their IT budget if it would follow the lead of our Gobal commercial customers.